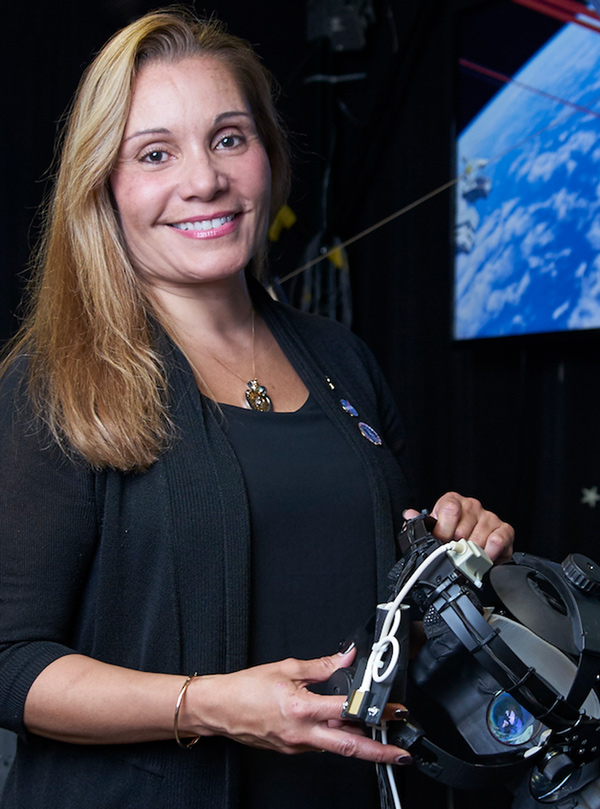 Evelyn Miralles is a pioneer and visionary who served as the Chief Principal Engineer at NASA Johnson Space Center in Houston, Texas. Her work from the Virtual Reality Laboratory at NASA has been integral to the advancement of “Human Spaceflight Exploration”, training U.S. and International Astronauts to perform one of the most dangerous excursions of their lives, Spacewalking, and working outside a spacecraft in micro-gravity. Currently Miralles serves an important role in academia as the Associate Vice President for Strategic Information Initiatives and Technology at the University of Houston in Clear Lake, Texas.

Miralles graduated from University of Houston Clear Lake with a Bachelor in Computer Information Systems in 1992, and a Master of Business Administration in 2012. Originally from Venezuela, she first earned a Bachelor of Science in Computer Graphics from the Lamar University in 1990, and it was then when she discovered a passion for computer science and technology.

Miralles designed and co-wrote the ‘state-of-the-art’ flight software ‘Dynamic Onboard Ubiquitous Graphics’ (DOUG), a unique Virtual Reality ready training tool use to prepare astronauts for every Space Shuttle and International Space Station mission since 2000, which earned her several NASA’s Outstanding Flight Software Awards. Miralles has also won the ‘Space Flight Award’, or well-known ‘Silver Snoopy Award’, presented by the elite NASA’s Astronaut Crew Office for her outstanding performance, contributing to flight safety and mission success over the years. She was been recognized for her many contributions delivering critical engineering tools for NASA’s operations, all described in the “Wings in Orbit,” a book about the significant legacy of the Space Shuttle Program for space exploration. Miralles has a record helping support space training for most of the Space Shuttle and all Space Station flight missions since 1993.

Miralles has been named as one of BBC’s ‘Top 100 Inspirational Women in the World’ for 2016, the CNET’s ‘Top 20 Most Influential Hispanics in Technology’ for 2015 and 2016, and was honored with the academic ‘Distinguish Alumna Award’ from the University of Houston Clear Lake, amongst many other recognitions. She lends her experience and leadership to fields of innovation in computer engineering and mix realities technologies on a national level, within government agencies and universities. Among her proudest roles, however, is to encourage young students and women to pursue and succeed in the areas of Science, Technology, Engineering and Math (STEM), including Art education, through lectures and other outreach efforts.

Evelyn is a Lecturer at the University of Houston Clear Lake’s engineering school. For more information, please visit the site UHCL.edu